On a recent rainy night, we were driving down Mowry Ave in Fremont and felt the urge to eat something hot and spicy.

Hey, what can be better than our Indian food.

Our choice for the evening was India Buffet in Fremont.

The restaurant was relatively empty when we walked in.

It was clean and the entrance was presentable and nice. 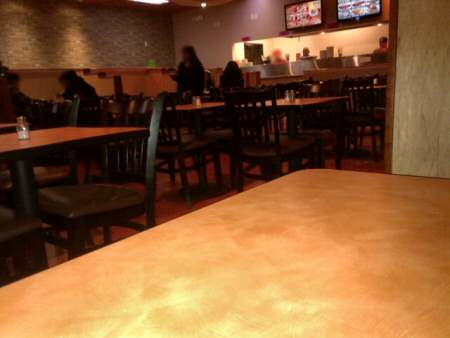 India Buffet Dining Hall
The inside decor was also pleasant.

Pay Before You Gobble

Unlike at most Indian restaurants, at India Buffet you have to pay up before you eat, right at the entrance.

India Buffet accepts Visa and Mastercard but not American Express.

Dinner Buffet on the day of our visit included two vegetarian stalls and one stall each for non-vegetarian items, Chutneys and salads, and Raita and desserts.

Andhra Chicken, Chicken Kabobs and Chicken Biryani were part of the non-vegetarian stall.

Boondi Raita and Kheer were found at the desserts stall.

Besides the buffet meal stalls, there was a Chaat station, Dosa corner and Naan bread counter.

Each had a person to prepare the choice of your items fresh.

You could order 8-9 items from a list of available chaats.

Similarly you could order any of the 5-6 Dosas available or a couple of Uttapams from the Dosa Corner.

Plain, Masala, Onion and Rava Sada Dosa and Plain, Onion, Veg and Tomato with Peas Uttapams were available on the day of our visit.

Naan counter included plain Naan bread and there was a person preparing and handing it out fresh from the oven.

All of the buffet items and Chaat, Dosa and Naan were included in the price of the dinner buffet which is $8.99 per person.

Here's my take on the various items I tasted, starting with appetizers:

Plates near the buffet stalls were clean.

Our used plates were removed promptly. I also liked the fact that you don't need to carry your original plate and could take a new clean plate for follow-on visits to the buffet stalls.

I would give a rating of 2.5 out of 5 for this restaurant.

While I enjoyed the hot and crisp Pakoras, overall the food items in two vegetarian and one non-vegetarian buffet stalls were warm to lukewarm in temperature.

Also, Andhra Chicken and Idlis were not refilled fast enough.

Vegetable and Chicken Biryani lacked the spicy, aromatic flavor of a biryani rice item and the Chaats were no great shakes.

Yet another irritating aspect was non-acceptance of American Express for payments.

On the whole, I was not too thrilled with my meal at India Buffet. - © BayMasala.com